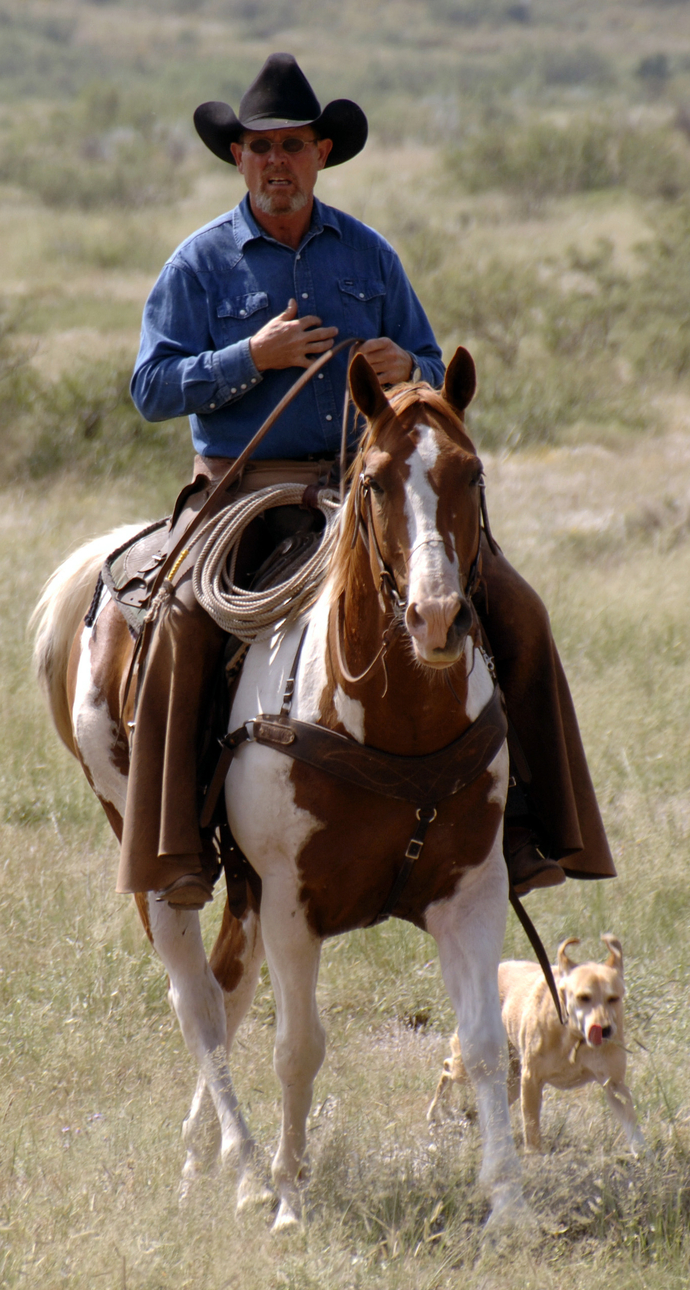 My family comes from North Dakota, where both of my grandfathers homesteaded around 1900. I was named after my grandfather on my mother’s side. They farmed wheat with big teams of horses and he also served as sheriff during prohibition. In 1950, my father and mother moved to El Paso, Texas where my dad taught civil engineering at Texas Western College, now University of Texas at El Paso.

I was born in El Paso on March 17th, 1953, and grew up in the Upper Valley. When I was young, I wanted to become a cowboy. My parents enabled me by providing a horse, showing horses, and participating in rodeos, which influenced my whole life.

After graduating from high school, I  attended Sul Ross State University in Alpine, Texas to study Range Animal Science and rodeo. My Dad and horse trainer, Jack Sanderson acquired a stallion from Harp McFarland near Cline Corners, New Mexico. My horse was a Quarter Horse of foundation breeding being sired by Red Man and daughter of Driftwood. This horse influenced nearly every horse I ever rode in my life.

My wife Keri’s family were homesteaders around Fence Lake, New Mexico during the depression around 1933. Her dad farmed pinto beans after WWII. He married her mother in 1952 in Reserved, NM, and moved to El Paso, Texas, and worked for Southern Pacific Railroad, where Keri was born February 14th, 1956, and grew up in the lower valley just downriver from where I was. She loved horses and showed and competed in gymkhanas, spending her summers on the San Augustine Plains at Fence Lake with her Grandparents, Aunts, Uncles, and cousins. 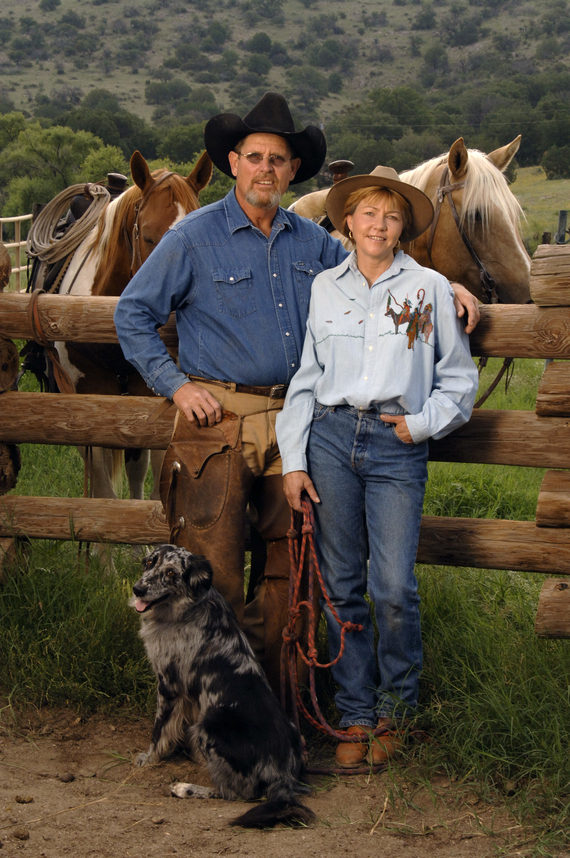 Keri and I met while attending school in Alpine. Upon graduation from college, I went to work for the Diamond A Cattle Company of Roswell, NM.  We then moved to the Botella Camp on the Big Bend Ranch in Presidio County Texas in 1979, where I became a real cowboy.

We were married horseback on   the Big Bend Ranch in 1980. This was the 9th largest ranch in Texas, The ranch was over 400,000 acres of dry, rocky, rough, and mountainous ranch land.  It bordered Mexico on its Southern boundary with over 20 miles of Rio Grande River frontage. The ranch was utilized for stocking yearling steers imported from Mexico during the fall and winter. Then in the spring, they would be shipped to other company-owned pastures in New Mexico and Colorado.

The ranch ran its own remuda and had a band of ranch mares.  From then on, raising ranch horses was a major part of our ranch operations. The ranch foreman at that time was Ralph Hager and used Head Dogs to gather cattle with. He was another major influence on the development of my skills as a young cowboy.

Ranch owner Robert O. Anderson, brought Texas Longhorn cattle to the ranch shortly after he acquired the property. Considered one of the purest herds of Spanish heritage cattle in existence, their Criollo genetics were priceless. Their ability to survive and reproduce at a phenomenal rate on harsh, marginal rangeland, demonstrated the importance of their genetic pool in the cow-calf industry, especially in the desert southwest.

Another advantage of these cattle is their ability to leave a less carbon footprint on our rangeland than other commercial breeds of cattle. Also the ranch managed the wildlife, both native and introduced, and had a recreational hunting program.

Keri helped with the management of the lodge facility that hosted hunters and guests during the various seasons.

Our son, John Jess “Bucko” was born in 1983 at the Cienaga Camp and in 1985 we moved to the Sauceda headquarters and I assumed complete operational management as Ranch Foreman.

The ranch was sold in 1988 to the state of Texas and became the largest state park in the lower 48 states. We both stayed on, me as the first superintendent of Big Bend Ranch State Natural Area and eventually a State Park. Keri remained manager of the much busier lodge facilities. As Park Superintendent, I helped in the development of this piece of property’s interpretation for the public. Ranching heritage was a major component of this story. 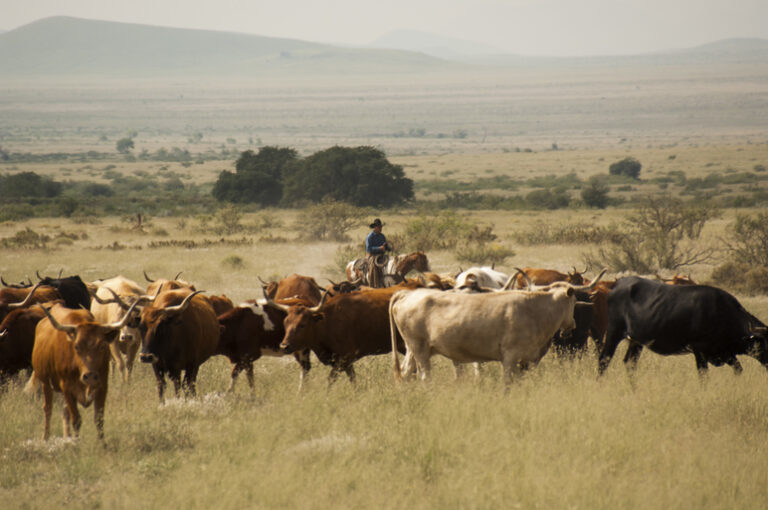 At the time of the sale we purchased, at private treaty from the Diamond A Cattle Company, half of their Criollo cows and bulls and on leased land, started our own ranching enterprise, Jinglebob Ltd, a registered cow calve operation selling first calve heifer bulls. The logistics of raising children on a remote ranch forced us to move to town. Up until that time my wife taught our son at home on the ranch through the 3rd grade. In 1991, we resigned from the State of Texas and moved to Marfa, Texas and continued our ranching operation. Acting on more opportunity to expand our “ranch”, we moved to The Haley Ranch in Loving and Winkler County Texas in 1992, where we were in partnership with J. Evetts Haley Jr. and enrolled our son in the Winkler Texas Public Schools. While there we, leased ranchland in Lea County New Mexico from Bert Madera, of the Pitchfork Ranch. This was our first venture ranching in New Mexico. 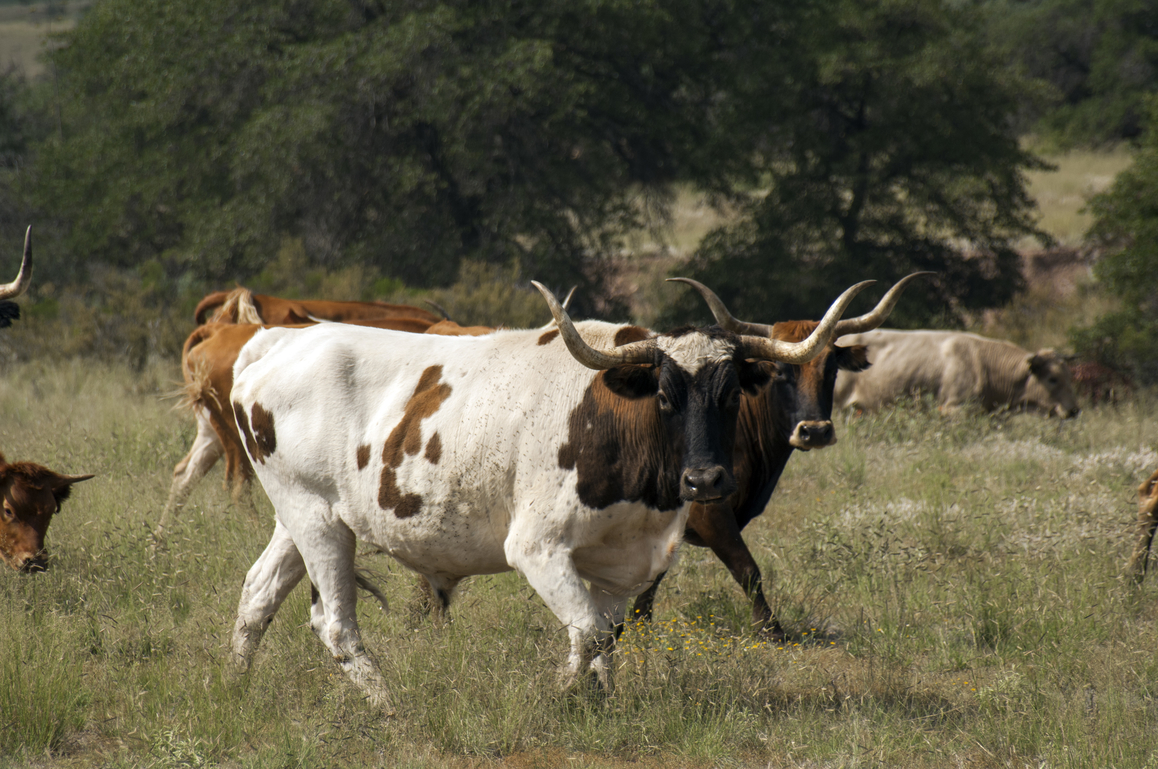 Not long after purchasing our breeding herd, we joined the Cattlemen’s Texas Longhorn
Registry, a national breed registry, whose purpose was to preserve the original Spanish
genetics in Longhorn Cattle brought to the new world on Columbus’s second voyage, using blood typing and phenotypic inspection. Through the years I have served on the Board of Directors, was elected president for 3 consecutive terms and finally was given a Director of Emeritus. While President, I initiated a feasibility study into forming a Texas Longhorn Beef Cooperative and received a $124,000 grant from USDA Rural Development to study producing a value added product. The study was a success in demonstrating the viability of the product but could not capitalize and never came to fruition.

Ranching in the desert southwest, drought is the common denominator in the decision making process and forced us to move our ranching operation to the Boot Heel of New Mexico near Animas in 1995. We saw it as a good opportunity to grow in the cattle business and leased the Lighting Dock Ranch from Andy and Louise Peterson near Cotton City and a year later leased their Rainbow Wash Ranch that adjoined the other ranch. Rated to stock 355 HD, this ranch was big enough to sustain itself through good times and bad, if it would only rain. Also it was a great place to raise our son.

New ranch, new country and a new market, the move opened up an opportunity to market our Criollo Cattle. The Team Roping industry at that time was the fastest growing equestrian sport in America. Being an active team roper, it was only logical that we enter the team roping industry as producers of roping cattle, more commonly call Corrientes, another Criollo breed. With genetics from full blood bulls imported from Mexico we started selling and leasing roping cattle around the southwest. Leasing or contracting roping cattle can be very lucrative if the cattle are handled correctly. Each animal produces income while you retain ownership. One steer or heifer can produce as much as $500 before they are considered too big. At that time, you get animal back and if it is a heifer she can be turned into a cow or a steer can be sold or retained longer and add value to it by turning it into beef and selling it. We choose the latter and created the label “Ganados del Rey” attaining our USDA certification in 2012. We started selling beef at the Farmer’s Market at Cruces and The Ardovino’s Desert Crossing’s Farmer’s Market at Sunland Park near El Paso. Our Beef is from cattle that have never given antibiotics or growth hormones, are pesticide free, Ranch fresh, grass fed, fodder finished, humanely handle using tradition methods and dry aged at least 21 days. 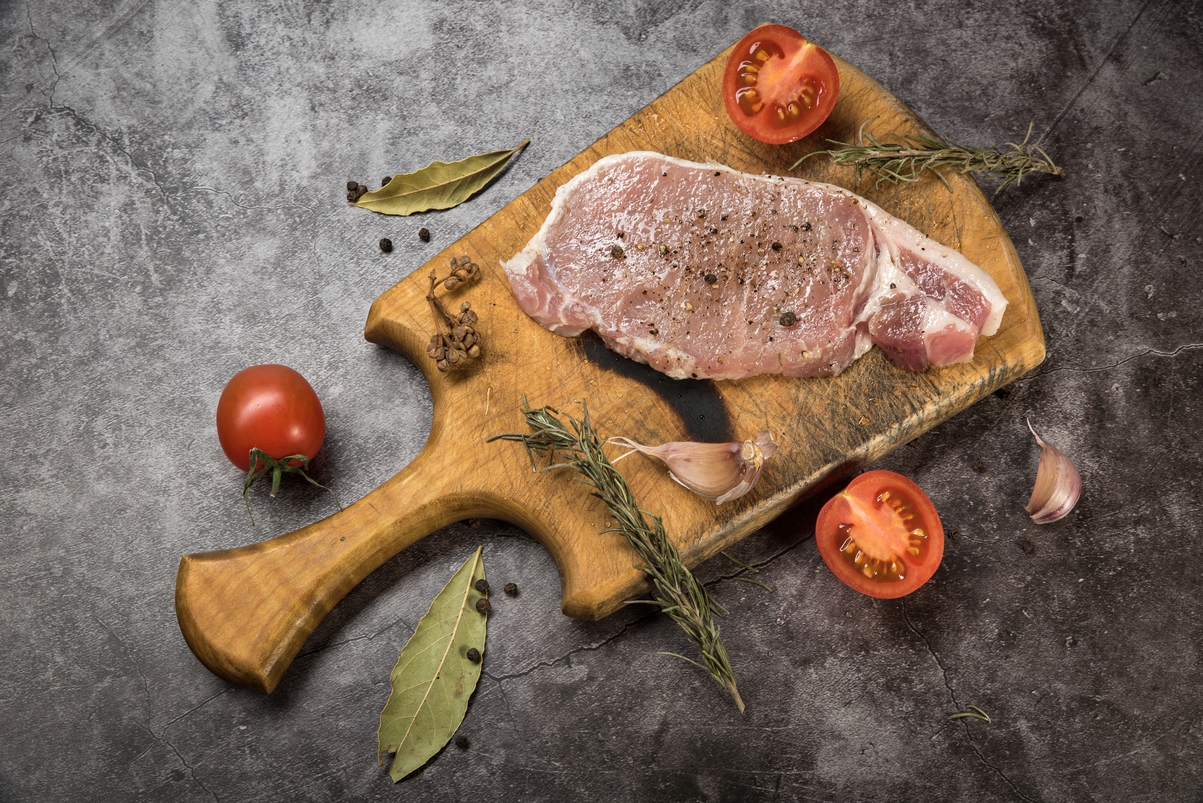 Leasing ranches and running them is fulltime work. Adding value by finishing cattle and marketing beef for retail sale is also full time job. We were getting older and decided to quit full time ranching and concentrate more on the value added portion of our business. We sold our farm in Animas and moved into my family house in Anthony, NM. We buy all our cattle here in New Mexico and West Texas from breeders we know and trust. Because of the absence of State or Federal processing plants in the area, we must have them processed in Cochise Arizona, the location of the closest USDA Slaughter/Processing Plant.

We are successful at what we do because we have figured out how to do it. We also have a consistent, quality product that we can deliver on a timely basis. We also have a market for what we produce. We hope in the future we can keep adding value to our product by processing it even more and provide a variety of beef products.